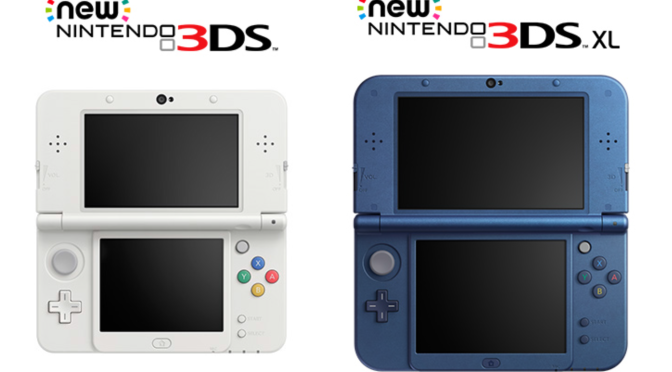 A new model of the Nintendo 3DS & 3DS XL has been revealed in a Japanese exclusive Nintendo Direct broadcast this week. Dubbed as the ‘New 3DS’ and ‘New 3DS XL’ (lengthening Nintendo’s fascination with calling slight tweaks to existing products as ‘new’), the updated models will feature a directional nub inspired by the C-stick of Gamecube controllers, trigger buttons, NFC support for Amiibo figurines and improved 3D functionality, as well as a faster CPU that will be required to play some more demanding games – including a newly announced port of the highly rated Wii title Xenoblade Chronicles.

The new 3DS will debut first in Japan on October 11th for a as of yet revealed price (with the XL version available in Metallic Blue or Black), but Europe will not receive the models until at least 2015. In the same Direct broadcast, Nintendo also revealed that Bayonetta 2 will finally launch in the United States on October 24th (with a Wii U version of the original included with retail copies). END_OF_DOCUMENT_TOKEN_TO_BE_REPLACED