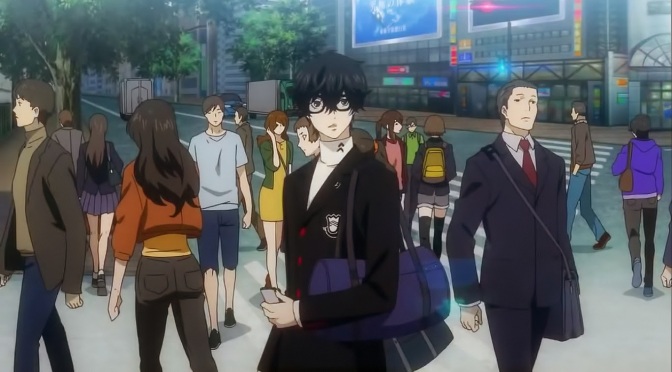 Persona 5, Atlus’ much anticipated RPG sequel, will be coming to PS4 – a decision which has immediately vindicated my decision to buy the console. The news was revealed in a new teaser trailer which featured in Sony’s pre-Toyko Games Show press conference, which also suggests that the game has slipped to a 2015 worldwide release date (it was originally intended that the PS3 version would arrive in Japan by the end of this year). On the flipside of this news however, 3DS title Shin Megami Tensei IV has been delayed in Europe until late October – pushing it further than a year since its original release.

A selection of 44 titles were shown off with several new games also revealed, including Resident Evil Revelations 2, a brand new Everybody’s Golf and the gorgeous looking Dragon Quest Heroes (which will get a special ‘Metal Slime’ edition of the PS4), as well as confirmation that dynamic menu themes will be included in System Software update 2.00. TGS 2014 kicks off in earnest on September 18th.

Destiny, the much hyped latest project from Halo creators Bungie, is released on September 9th and is all set to become the best selling new-IP in video game history. In a nice gesture, Bungie have confirmed that anyone who buys the digital version of the game on either PS3 or Xbox 360 will be able to upgrade to a digital next gen version for free if they download the title before January 15th – the deal is however limited between console families; you won’t be able to upgrade from a 360 to PS4 for example. Full details can be found on Bungie’s official site.

Related to Destiny, in an interesting move to try and counter the almost exclusive advertising run for the game that Sony have enjoyed, Microsoft are also running a deal in America between the 7th and 13th of September where if a consumer buys an Xbox One console, they can get a retail game for free: a saving of $59.99 which makes Destiny cheapest on Xbox One for new hardware adopters. It will be intriguing to see if the gambit pays off.

Nintendo have stated that its Amiibo figurines for Super Smash Bros for Wii U/Mario Kart 8 will retail for £10.99 apiece in the UK. The initial run of figurines includes twelve characters, with classic heroes like Mario, Link and Samus as well as new characters included in the upcoming SSB game including Wii Fit Trainer and the Villager from Animal Crossing.

The price for the figurines is roughly in the same ballpark as the cost of models used for both Skylanders & Disney Infinity, which currently hold a monopoly on the ‘toy video games’ genre.

Amazon has decided to release its Fire TV microconsole in the UK after promising sales following its US launch earlier this year. It will be on sale from October 23rd at £79.99, but most games will require a separate controller which will cost £34.99. Amazon, who recently purchased Twitch for $1 billion, will be looking to avoid the relatively flat response given to the last high profile microconsole, the Ouya, leveraging its streaming services and exclusive original content in its favour.

Metro Redux – a dual pack featuring next-gen versions of both Merto 2033 & Metro: Last Light – has taken the top spot on the UK Game Sales Charts this week. The other new entry in the Top 40 was Madden NFL 15, which debuted in sixth position. As we’ve now hit September, expect plenty of fresh names in the Top 10 over the coming weeks…

3 – The Last Of Us: Remastered (Naughty Dog)

In a quiet move that may have gone unspotted had it not been for the ever keen eyes of the internet, Sony have filed a new trademark for Vib Ribbon, a cult classic rhythm action game from 2000 which was developed by Parappa The Rapper creators Nana-On Sha. Featuring wire frame graphics and the ability to create levels from your own CD collection, it was something of a cherished oddity.

The filing of the trademark doesn’t give much away with regards to whether this means another game is in the pipeline (or more likely the original is coming to the Playstation Store as a PSOne Classic), but it does give me an excuse to remind everyone of the wonderfully quirky soundtrack which has taken a couple of spots on my list of Best VGM Music. You can access the songs via the links below.