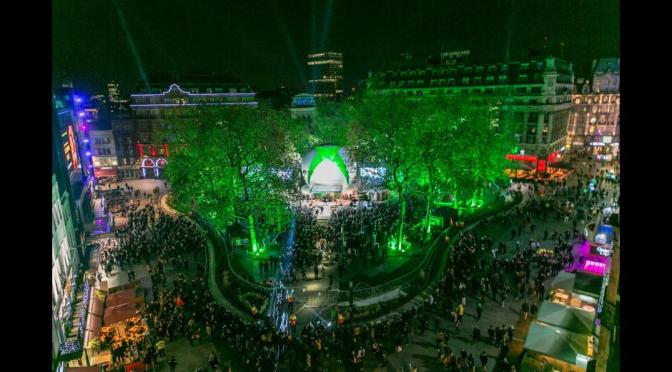 The Xbox One is finally here; and Microsoft decided to reach deep into its coffers to let the world know about it. To celebrate the release in 13 international markets, iconic locations including Times Square, the Sydney Harbor Bridge and Leicester Square in London were taken over by Microsoft with more green lighting, zombie cosplayers and unrecognizable celebrities than you could shake a…£429 console at, I guess. The launch parties even made the national news headlines here in the UK, which is no mean feat for an industry still treated somewhat with indifference by various news corporations.

The quoted figure from Microsoft is that over one million consoles have been sold ‘in under 24 hours’, making it the biggest launch of an Xbox console yet. It marks a pleasantly successful end of a troublesome inception for the Xbox One, and considering the sheer amount of negativity attached to the initial plans for online DRM and the sharing of games I would have thought Microsoft are pretty pleased with the reaction for the console, even if the critical reviews for launch titles including Forza Motorsport 5 and Dead Rising 3 have been largely average.

Did you pick up a Xbox One at launch? What do you make of it so far? Let me know in the comments section at the base of the article.

The situation at Blockbuster has skipped from bad to awful this week; already in administration for the second time this year, 72 stores will now close costing over 450 jobs. This is in addition to the 320 odd stores already shut down in the UK at the start of the year.

The company has also suspended its postal service and online marketplace – people who have recently rented products will be automatically refunded, whereas those who rented products before the company fell into administration on October 29th will be allowed to keep the games/movies they have as an optional refund. If you have any further doubts about refunds or outstanding orders, I recommend you visit this FAQ that Blockbuster has put together.

The rumour mill has been on overdrive this week for certain developers. First off, it was reported that Cambridge-based studio Ninja Theory (the people behind DmC) were abandoning console development (with lead designer Tameem Antoniades claiming the “AAA games console model is a little bit broken”) in favour of mobile support, a rumour which has since been quashed by the studio themselves. Next, unconfirmed reports stated that TellTale Games are set to be working on a game based around the very popular Game Of Thrones, to which TellTale offered no comment.

And finally yesterday, it was rumoured that Sony could have potentially bought the rights for Crash Bandicoot away from Activision with the intention of a reboot on the PS4. All references to Crash have been removed from the Activision website, and a particularly eagle-eyed member of NeoGAF spotted a possible Easter egg in a recent PS4 commercial. Neither Sony nor Activision have commented on the matter, but I hope to the heavens above this news comes true.

Electronic Arts’ licensing deal with Disney for games based on the Star Wars franchise is set to last until 2023. Speaking at the USB Global Technology Conference, EA’s chief financial offer Blake Jorgensen revealed the length of the deal, as well as stating that the company doesn’t intend to release games based around the upcoming films Episode VII-IX:

“The beauty of the Star Wars franchise is that it’s so broad and so deep, you don’t have to do a movie game, you can do a game that’s very focused on the world that’s been created around Star Wars”

EA previously revealed at E3 2013 that a reboot of Star Wars: Battlefront is currently under development by Battlefield creators DICE, and that it has plans for Star Wars games under the helm of Visceral Games and BioWare.

To highlight the impending UK release of Super Mario 3D World, Nintendo have outlined details on a new Mario-orientated Wii U bundle…in this, the Year Of Luigi!

For £299.99, the Mario Mega bundle includes a Premium Wii U console, copies of Super Mario 3D Land, New Super Mario Bros. U & New Super Luigi U, a red Wii U controller and to top it all off, a Mario hat. With 3D World receiving perfect reviews across the board now might be an opportune time to invest into a Wii U, especially when you consider that £299 was the price of a basic Wii U Premium less than a year ago.

In addition, Nintendo are offering a free digital copy of Super Mario 3D Land for European 3DS owners. Registering your handheld along with one of a selection of 15 games (including recent releases such as Pokemon X & Y, The Legend Of Zelda: A Link Between Worlds and Professor Layton And The Azran Legacy) via Club Nintendo between the 27th November and 13th January 2014 will give you a code for 3D Land that can be redeemed on any 3DS or 2DS. If you’ve already purchased the games/console before the 27th but haven’t registered, you are still eligible for the offer.

The fan made remake of the original Half Life, Black Mesa, has been confirmed for release as a commercial product on Steam. Speaking on the Black Mesa Steam Community Page, the developers have explained the move stating that they would like full access to Source engine to improve the game and that the “team could really use the financial help”, but plans for a free version of the game have not been dropped – an updated version of the free release from last year will also appear on Steam

In other independent release news, on Monday the developers of the popular iOS title Ridiculous Fishing Vlambeer announced that an Android version might be released ‘sooner than you think’. On Wednesday, the game was released as part of the new Humble Mobile Bundle – talk about a quick turnaround.

Not even the combined might of the Avengers (and Howard The Duck) could prevent Call Of Duty: Ghosts taking top spot on the UK Game Sales Charts for the second week in a row, although Lego Marvel Superheroes recorded the best launch sales for any game in the Lego series yet.

Sadly, Sony’s continued poor marketing efforts in the UK meant that Ratchet & Clank: Into The Nexus only sold enough copies for a measly 21st place in the charts.

One of the highlights of EA’s conference at this years E3 was the sudden reveal of a Need For Speed movie. Featuring Aaron Paul (Breaking Bad) and Michael Keaton (Batman) amongst the cast-list, it has the potential to be a decent videogame movie…although that’s mainly because the games are about real-life cars and so the transition from game to the big screen shouldn’t be too difficult. Whether it ends up being a poor imitation of The Fast And The Furious remains to be seen.

Anyway, enjoy the latest trailer for the film slanted for a March 2014 release.

One thought on “WEEKLY NEWS UPDATE FOR 18th – 24th NOVEMBER”