There’s still two days or so until E3 kicks off with Microsoft’s press conference, but it seems that game developers across the globe have got impatient waiting, and the result is that over the last two days we have had a flood of news about new games. In this article I will try to cover as much of the headline news as possible.

To perhaps avoid the embarrassment caused by last years hilarious live conference at E3, this year Konami decided to put together an hour long package showcasing what they have to offer, which became available last night in the UK. You can watch the full video here, but summarised below are the important points:

In my opinion, Konami have provided us with a mixed bag. On the one hand, it is very disappointing that nothing new and extraordinary has been announced; I think Kojima summed it up when he said that 2011 is a year of preparation. However, NeverDead has the promise to be a fantastic little action game (I mean who doesn’t like the idea of being able to roll around on just your legs shooting stuff?), and I am highly anticipating the MGS HD Collection on the Xbox 360; I think its another game that has been added to my ‘Must Buy’ list in November.

Well that’s Konami sorted out, but the rest of the industry still has lots more to tell us. Again, this is just a brief summary of what has been going on:

I hope this has whetted your appetites for E3, I will certainly be watching closely to see what happens, and I will do my best to post up at the end of each day the main details from the press conferences. I shall leave you with the timetable for E3. Have a good weekend. 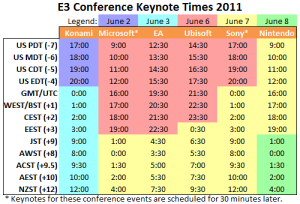